If you have an appointment to receive a Covid-19 vaccination, click the button to the right to download the forms you should fill out as well as important information before you arrive for the vaccination.

The emergency room at Schleicher County Medical Center is open 24 hours a day, seven days a week, and is staffed with highly-trained physicians, advanced practice providers and nurses.

Our radiology department offers a wide-range of services, including CT scans, bone density testing, as well as chest, head, spine and extremity X-rays.

Our physical therapy department provides care to individuals who suffer from movement and functional difficulties from aging, disease, injury or environmental factors.

Continue Your Recovery,
Close to Home

The Swing Bed Program at Schleicher County Medical Center is for Medicare patients discharged from SCMC or any other hospital following an acute illness, injury or surgery, who still need time and physical therapy to heal and strengthen before going home. 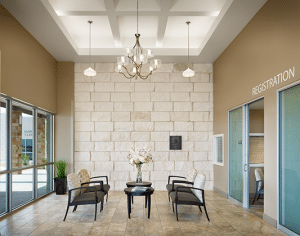 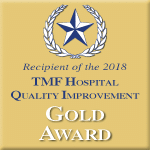 Located in Eldorado, Texas, Schleicher County Medical Center (SCMC) has been Providing Progressive Healthcare with Small Town Compassion to the residents of Schleicher County for more than 50 years. SCMC was recognized with the 2018 TMF Gold Award for Hospital Quality Improvement. This regional award was given to only 51 of the 745 hospitals in Arkansas, Missouri, Oklahoma and Texas, that demonstrated improved performance on specific national quality measures.

The hospital is licensed for 14 inpatient acute care beds, all of which may be used as “swing beds” or skilled nursing beds. Further, it maintains Level IV Trauma Center designation, providing emergency 24-hours-a-day, 365-days-a-year. Through the hospital’s affiliation with Avera eCare, the services of local providers are complemented by those of board certified emergency room physicians and critical care nurses immediately available through telemedicine at the touch of a button.

County Residents Voted in 1966 to Build a Hospital in Eldorado

Located at the Top of the Divide, Eldorado can be found 47 miles south of San Angelo, and about 200 miles west of Austin and southwest of San Antonio. With approximately 3,000 residents, this small county community has maintained continuous support of the hospital since 1966 when a “straw poll” of the community conducted by The Eldorado Success found 230 Schleicher County residents in favor of, and only 4 residents opposed to, to building a hospital in Eldorado.

The potential to build a hospital was first explored 23 years earlier, following the end of WWII, but the community opted instead to build a memorial building to honor returning veterans. The issue resurfaced in 1966, when the lack of a hospital triggered the loss of a local physician and made recruiting new physicians very difficult. “If am going to be an Eldorado doctor I want to be an Eldorado doctor and don’t want to spend half my time at an out-of-town hospital,” said a potential recruit from Pasadena, Texas.

Local voters agreed overwhelming, voting 579 to 198 to issue $450,000 in bonds to construct a hospital, and voting simultaneously to approve formation of a hospital district. The Schleicher County Hospital District was approved by the Texas State Senate on April 6, 1967. A larger clinic was added in 1981 which is now called the Schleicher County Family Clinic.

Partnership with Preferred Forged in 2000

With the support of the community, the Schleicher County Hospital District successfully guided hospital, clinic and nursing home operations for over 30 years.

In 2000, faced with increasing complexity of state and federal regulations, higher costs and lower reimbursement, rapidly advancing technology and the challenge of professional staff recruitment, the Schleicher County Hospital District entered into a management agreement with Preferred Management Corporation, a Shawnee based operator of rural hospitals. On March 2, 2000, the hospital became the third hospital in Texas to secure federal designation as a Critical Access Hospital. Designation of Schleicher County Family Clinic as a Rural Health Clinic followed shortly.

Building on its successful partnership with Preferred, the District leased the hospital and clinic to Preferred Hospital Leasing Eldorado, Inc., in 2005, maintaining community input to local health care, but shifting the risk of operations to Preferred.

Community support continues to be the real foundation of the hospital, with a May 2011 vote to approve the issuance of a $17.37 million bond issue to finance construction of a new hospital, clinic and nursing home. The hospital and clinic moved into their new homes in March 2013, followed shortly by the nursing home.

Location of the hospital, nursing home and clinic on the same campus makes services convenient for patients, residents and their family members. The hospital has 14 beds in 9 patient rooms, so most patients enjoy private rooms during their stay.  State-of-the-art emergency, imaging, laboratory and physical therapy services are also available. The nursing home offers 32 rooms with 34 beds. Both the nursing home and hospital are served by the new, conveniently located rural health clinic.

The Schleicher County Family Clinic offers a variety of services to take care of the whole family and is open Monday through Friday 8:00 a.m. to 5:00 p.m. with administrative staff also available from 12 noon to 1 p.m.

Billie brings 27 years of healthcare experience to Schleicher County Medical Center. She began her healthcare career in the front office of a Rural Health Clinic.

She then continued to serve as a floor nurse, Pharmacy Tech, Informatic Technology Manager, Business Office Director, COO, Administrator of 3 RHCs, before becoming CEO, of a 25 bed Critical Access Hospital.

Jennifer earned her Associate, Baccalaureate, and Master’s degrees in nursing at Angelo State University in San Angelo, TX.  She earned her doctorate from Chatham University in Pittsburgh, PA. She holds as a Certified Nurse Educator and a Certified Hospice and Palliative Nurse.  Jennifer has experience in medical/surgical, telemetry, women’s health, pediatrics, hospice, and nursing education and professional development.  She has a passion for public health and developing healthy communities.

Schleicher County Medical Center is health care you can trust.